Orlando Health has kicked off a $10 million fundraising campaign to upgrade and more than double the size of ORMC’s Level One Trauma Center in downtown Orlando.

“On multiple Friday and Saturday nights, I’ve had the trauma bay full from just one carload of people,” said Dr. Joseph Ibrahim, medical director of ORMC Trauma Center. “It doesn’t take Pulse or a bus turnover [to fill the trauma bay]. It’s a busy area and the population is rapidly growing.”

When the hospital’s trauma bay was designed 25 years ago, its patient volume hovered at about 1,000 per year. That number has increased to more than 5,000 trauma patients annually.

Contrary to common belief, “the trauma bay is not just for trauma,” said Ibrahim. “We actually use it for heart attack and stroke victims and patients who have overwhelming infections and are critically ill.” 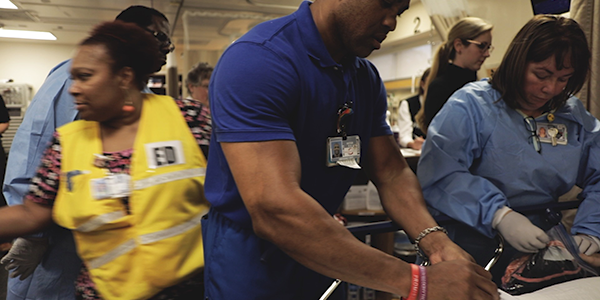 ORMC houses Central Florida’s only Level One Trauma Center, with the ability to care for severe injuries, ailments and burns.

The bigger space will better accommodate the staff and allow for the addition of new equipment, some of which the trauma side is currently sharing with the emergency department.

“The expanded trauma bay will also provide significant surge space, allowing us to rapidly add 10 more treatment areas in a mass casualty situation,” hospital officials wrote in the preliminary plans they shared with some donors in April.

Today, the Level One Trauma Center ranks better than most other centers in Florida and the nation, according to a recent analysis by the Leapfrog Group that was done for and reported by USA Today.

In 2015, the hospital added 18,000 square feet and 17 new rooms to its existing 50-room ER. Now the hospital is planning to upgrade equipment, technology, fixtures and finishes of the older part, which dates back to 1995.

Meanwhile, parts of the expansion design are guided by lessons from the Pulse tragedy.

The hospital is making the ambulance bay more private by installing an “adjustable, or perhaps, removable industrial grade curtain, which would eliminate the view of patients being unloaded and brought into the Trauma Bay (even if the camera attempting to take the image is mounted on a helicopter — as some were during the Pulse shooting),” hospital officials wrote in their plans.

“A significant amount of capital is needed to completely overhaul and upgrade the technology that is so desperately needed for an area that is one of the most used in all of Orlando Health,” officials wrote.

Since the Pulse tragedy, the trauma center has also hired two trauma surgeons, bringing its total to nine.

“[The expansion] allows us to do much more, more efficiently,” said Ibrahim, who trained at ORMC a decade ago and returned five years later to eventually became the trauma center’s medical director. “I’m overjoyed.”

Information will update every 5 minutes. ER Wait Times are approximate and provided for informational purposes only. Estimated Wait Times as of: Friday, May 27, 2022 11:24 AM