More Than $500,000 Raised for Cancer Research at Arnold Palmer Hospital

In only four years, more than $500,000 has been raised to support cancer research through clinical trials at the Haley Center for Children’s Cancer and Blood Disorders at Arnold Palmer Hospital through Arnie’s March Against Children’s Cancer.

This year’s event drew more than 1,200 supporters to Arnold Palmer’s Bay Hill Club & Lodge for the fourth annual Arnie’s March. As of this printing, the 2016 efforts of 53 teams and 750 donors have netted more than $146,000 that will stay in Central Florida and support the cancer research and clinical trial team at Arnold Palmer Hospital. 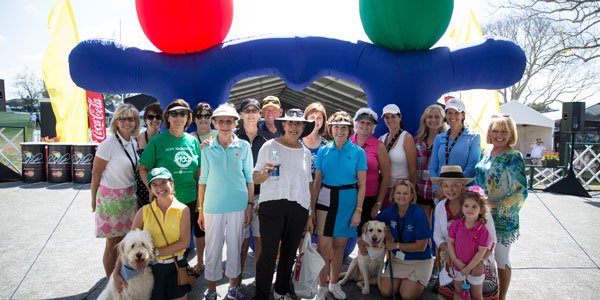 (For the second year in a row, Team Bay Hill & Friends, led by Sara Ball, finished as one of the top three fundraising teams, raising $6,760 for Arnie’s March.)

Thank you to everyone who supported this year’s event, including our partners – the Arnold Palmer Invitational Presented by MasterCard®, Coca-Cola, JetBlue and Bay Hill Club & Lodge, our dedicated team captains, gracious donors and all who marched together at the event.

Even with this year’s success, the work is not done. Individuals and team captains who created teams at ArniesMarch.com can continue using them as tools for ongoing fundraising efforts. Just as cancer doesn’t stop after the event in March or after Childhood Cancer Awareness Month in September, neither should our fundraising efforts. Stay tuned for more details about additional opportunities to get involved, raise awareness and raise critical funds for the more than 100 new children who are diagnosed with cancer each year at Arnold Palmer Hospital.

Information will update every 5 minutes. ER Wait Times are approximate and provided for informational purposes only. Estimated Wait Times as of: Thursday, August 18, 2022 7:23 AM